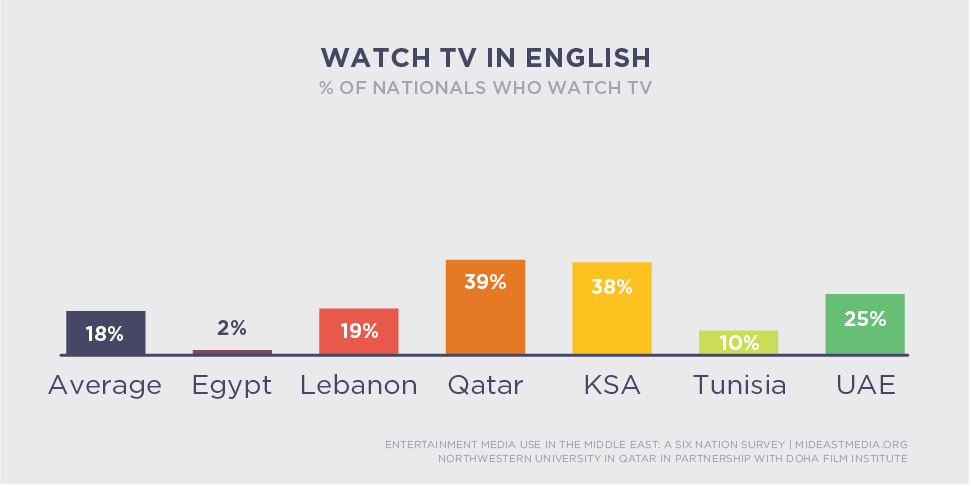 Arabic is by far the most frequently used language for watching TV; well over three-quarters of all MENA residents in this survey watch TV programs in Arabic (81%). There are, however, sharp distinctions between countries in the incidence of watching TV in Arabic. In Egypt, Lebanon and Tunisia watching TV in Arabic is essentially universal, but much less so in Gulf states. In the UAE, only a slight majority of the population watch TV programs in Arabic (52%), more in Qatar and over three-quarters in Saudi Arabia (60% and 82%, respectively). This, of course, varies substantially by ethnicity. Almost all Arab nationals and expatriates in these countries watch TV programming in Arabic, while fewer than one in ten Asian and Western expats do so. Non-Arab expats in Qatar are slightly more likely to watch programming in Arabic, while essentially none of the Non-Arab expats in the UAE do so.

This is similar to film viewing among this sub-group. Asian expats are actually most likely to watch television in Hindi (65%, 79% among Indian expats specifically). Consistent with the ethnic make-up of each country, a majority of the population in Qatar watches TV in English, as do about half of the residents of Saudi Arabia and the UAE (54%, 46%, and 45% respectively). Comparatively, about one in five Lebanese residents watch some TV in English, more than in Tunisia or Egypt (19%, 12%, and 2% respectively).

Arabic and English generally cover TV viewing in the six countries, although there are pockets of viewing in other languages as well. Watching TV programs in Hindi, as noted above, is popular among Asian expats in the region, and French TV programming is somewhat popular in Tunisia, where a quarter watch in French (23%). There are small populations in Qatar, Saudi Arabia and the UAE who watch TV in other languages such as Urdu and Malayalam.

When watching TV programs in languages other than their own, viewers generally prefer subtitles to dubbing