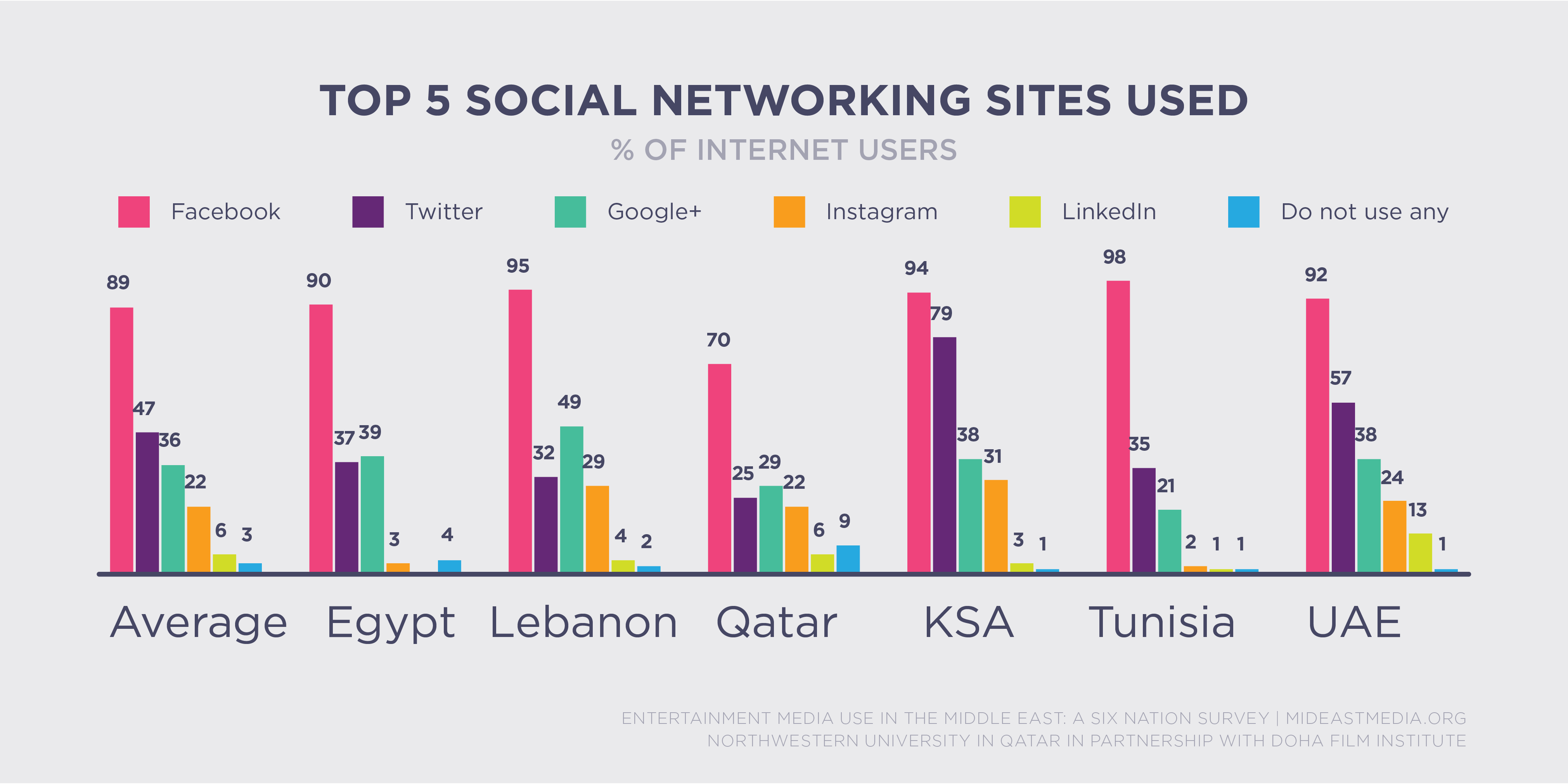 Four destinations dominate social network use in the countries surveyed: Facebook is the leader, with a distant second of Twitter, followed by Google+, and Instagram.  At least seven other social networks are used in the region, but none of them by more than one in ten. LinkedIn – a popular social network in the Unites States for

instance – is used by very few in the MENA region overall (6%), but slightly more in the UAE (13%), the country with the greatest internet penetration. All other social network sites – including some, like Tumblr and Flickr, with acceptable name recognition in other parts of the world – are used by few people in the six countries covered in the study.

Facebook is, by far, the most popular social network in the MENA region, used by nearly twice as many internet users as Twitter, its nearest rival. More than 90% of internet users are on Facebook in five of the six countries covered in this study. Only in Qatar is Facebook used by fewer than three-quarters of those on the internet (70%), driven by very low use among Qatari nationals. Only a third of Qatari citizens use Facebook, and they are considerably more likely to use Instagram (46%) and as likely to use Twitter as Facebook (37% and 36%, respectively). Facebook has much more popularity among expats living in Qatar (75% Arab, 85% Asian, and 87% Western expats). Facebook use is equally strong across nationalities in Saudi Arabia and the UAE, although slightly lower among Asian expats overall. Among social network users, Facebook is consistently the most appealing to all sub-groups in the overall population, as well as across all levels of education.

Twitter is used by about half of all internet users in the survey, with much heavier use in Saudi Arabia and the UAE than elsewhere (79% and 57%, respectively). Overall in the region, Twitter is much more popular with U.S. and European expats than those with Arab origins or Asian expats (70%, 48%, and 35%, respectively). However, there are country variations. In the UAE, Western expats use Twitter more than all other residents (81% vs. 57%). Twitter is equally popular among all groups in Saudi Arabia.

Twitter is more popular with younger users. The majority of those under 25 use Twitter (57%) compared with a third of those 45 and older (32%). Those with more education are also more likely to use Twitter.

Google+ has enjoyed modest success in the MENA region, attracting about a third of internet users (36%).  It is more successful in Lebanon than in the other countries in this study, as half of Lebanese internet users access Google+, but less so among internet users in Tunisia (21%). Google+ has strong popularity among non-Arab expats in all three Gulf states, less so among Arab nationals and expats. As with other social networking sites, Google+ use is most popular among the youngest age group (under 25) and the most educated (those with university degrees).

Instagram is used by about a fifth of internet users in the survey, but is essentially not used at all in Egypt or Tunisia. Instagram is more popular with younger users – with very little penetration among those 45 or older – and is much more likely to be used among those with university degrees. Nationals in the UAE and Qatar are more likely to use Instagram than any other nationality (49% and 46%, respectively).  Instagram is the most used social networking site among Qatari nationals – even above Facebook. On the whole, Asian expats are less likely to use Instagram; only about one in ten do so.