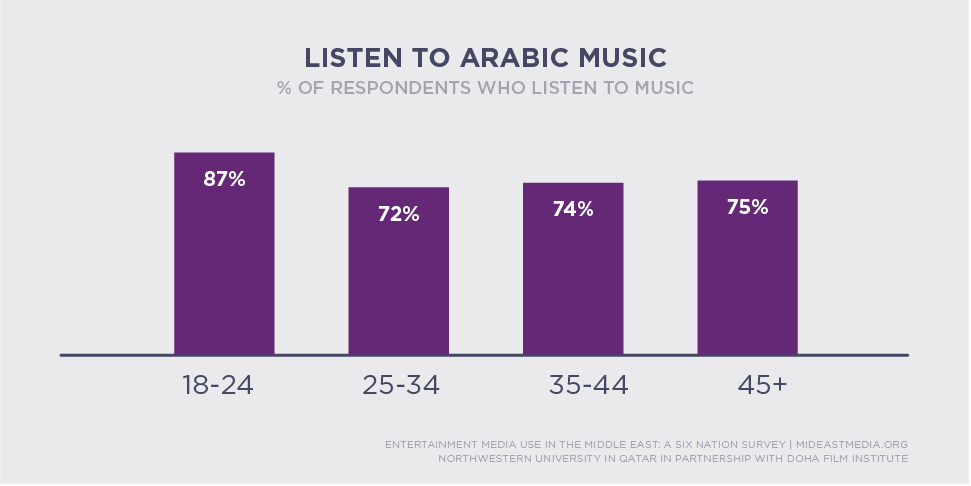 More than three-quarters of adults listen to Arabic music (77%). Preferences for genres within Arabic music often correspond to locality (for example, a preference for Arabic Egyptian music in Egypt, Arabic Lebanese music in Lebanon). As a whole, however, Arabic music is much more popular than Western music among all segments of the population, with the exception of non-Arab expats.

Egyptian music is most popular overall (59% listen to this music), and is the most popular Arabic music in three of the six countries covered in the study. Egyptian music is, by far, the most popular type of music among Egyptians (98%), and music from Egypt is also enjoyed by a majority of listeners in Saudi Arabia, Lebanon, and Tunisia (75%, 61%, and 61%). It finds least resonance in Qatar and the UAE (25% and 38%), but is popular among UAE nationals if not Qatari nationals (63% and 31%).

Music listeners from Saudi Arabia and Tunisia have the most eclectic tastes in music from different parts of the MENA region, indicating enjoyment in all types of music of the region. Among those in Saudi Arabia, this broad interest in music includes Western music as well. Egyptians, on the other hand, listen almost exclusively to Egyptian music.

Lebanese music is heard by four in ten music listeners overall (41%), but its popularity is reported mostly in Lebanon itself, Saudi Arabia, and Tunisia (96%, 57%, and 43%, respectively). Very few listen to Lebanese music in the other countries in the study. Music indigenous to the “Khaleej,” Arabic for “Gulf,” is heard by a third of all listeners, being particularly popular in Saudi Arabia (35% overall vs. 78% Saudi Arabia), and enjoying a broadly similar level of popularity elsewhere except Egypt.