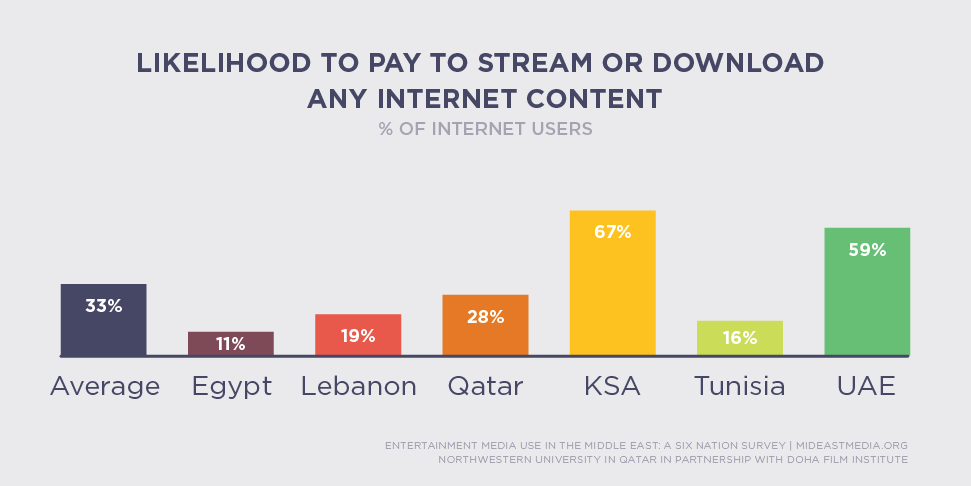 Likelihood to pay to stream or download entertainment content varies by the type of content. While half overall indicate a likelihood to stream or download at least one form of content (49%), this ranges from 23% for television shows to 35% for video games. Internet users in the MENA region are more likely to pay for video games, films and sports events online (35%, 33% and 31% respectively), and less likely to pay for music and television series (28% and 23%, respectively).

Residents of Saudi Arabia are by far more likely than those from all other five countries to pay to stream/download internet content. About six in ten internet users in Saudi Arabia say they would be likely to pay for films, television, sports events and video games online, and half would pay for digital music. Fewer than half of respondents in the other five countries are willing to pay for any one form of online entertainment content. Four in ten internet users in the UAE will pay to stream/download films, and fewer respondents from the Emirates expressed willingness to pay for video games and music (36% and 33%, respectively).

Western expats show greater likelihood to pay to stream or download music, television and video games (41%, 31% and 43%, respectively) than nationals or other expats, perhaps because some of their preferred content is less accessible in the MENA country in which they reside. Men show much greater interest than women in paying to stream or download sports events (40% vs. 18%) and video games (38% vs. 30%), as well as films (35% vs. 30%).Women, on the other hand, are somewhat more interested in streaming/downloading television series (25% vs. 21%). Older internet users (45 and above) generally show less interest in paying to stream or download entertainment content, but are as likely as younger internet users to be willing to pay to watch sporting events online. Income is not a factor in likelihood to pay for online content.