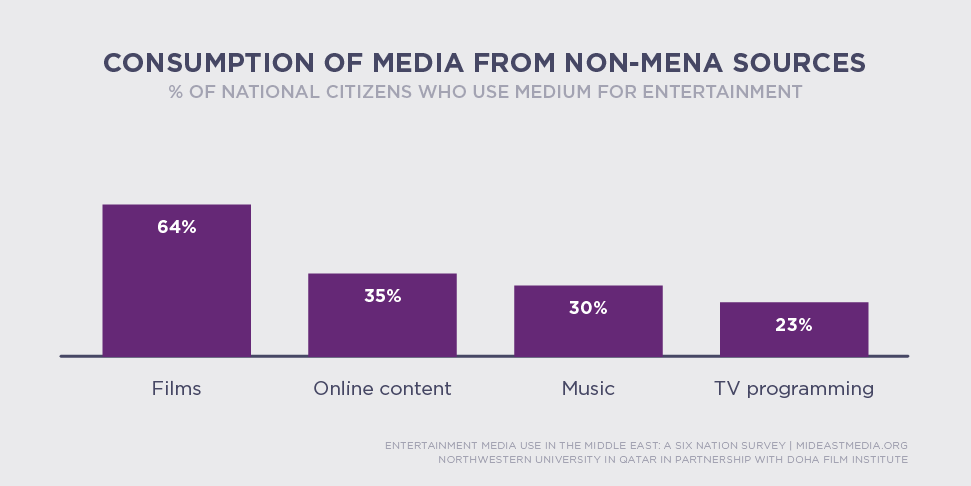 Films from the United States are fairly popular across all nationalities. Six in ten Western and Arab expats watch U.S. (Hollywood) films (60% and 62%, respectively), as do nearly half of Arab nationals (46%) and a third of Asian expatriates (34%). Lebanese and UAE nationals are the most likely to watch U.S. films (7 in 10 do so in both countries), while those in Egypt and Tunisia are less likely to do so (29% and 34%, respectively). More than half of Qatari nationals watch U.S. films (55%).

People in the MENA region are less likely to consume other types of media – online content, music, television – from the U.S. (32%, 27% and 17%, respectively).

Three in ten respondents watch films from India, likely due to the presence of Asian expats; one quarter of all respondents watch European films. Fewer watch films from Turkey or Asia-Pacific (17% and 8%, respectively). One in five or less consumes music, television and online content from Europe, India, Turkey or Asia-Pacific.

Younger respondents are more likely than older participants to consume content from around the world, including the MENA region (film, music, television, online content), as well as the United States (film and music), Europe (film and music) and Turkey (film and television).