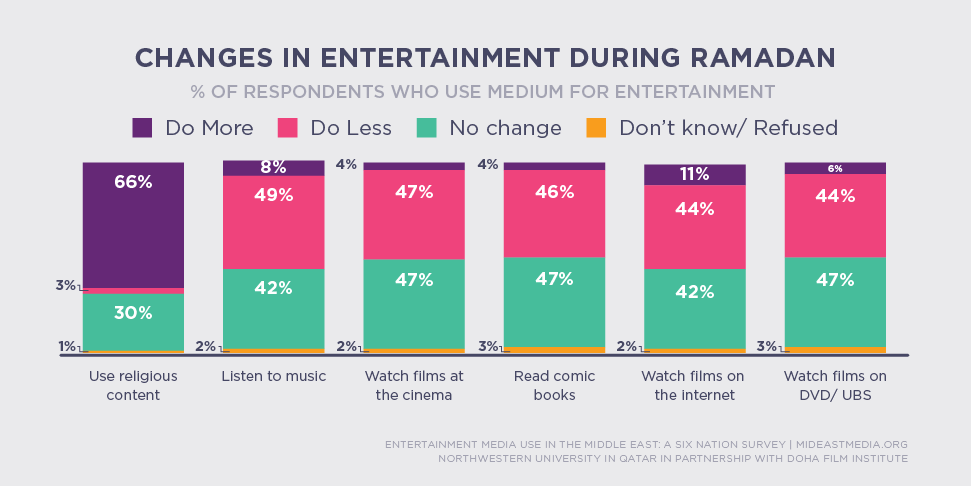 The types of activities people report engaging in change somewhat during the Islamic holy month of Ramadan. While the amount of change varies by activity, on average about half of those surveyed change what they do during this month – either doing it more (such as using religious content) or doing it less (such as listening to music). On the whole, people are less likely to take part in entertainment-related activities during Ramadan, and are more likely to use religious content and spend time with family and friends (66%, 40% and 34%, respectively, do more). People are also more likely to watch television during Ramadan (41%). On the other hand, half of respondents say they do not listen to music as much during Ramadan. People also watch fewer films during this month, via all formats (cinema, online, disc and TV). The amount of time spent reading newspapers is least likely to change during the holy month, followed by reading magazines and exercising/playing sports (60%, 55% and 54% do not change).

holy month of Ramadan. UAE has a large non-Muslim expatriate community and Lebanon has the largest percentage of Christians of any Arab country, which may contribute to entertainment-as-usual during Ramadan. Of note, a large majority of Egyptians use more religious content during Ramadan (86%), while only 39% of those in Lebanon use more religious content. Two-thirds of Tunisians spend more time with family during this holy month (64%) while only 22% of those in Qatar do so.

Non-Arab expats are less likely to change their entertainment habits during the month of Ramadan, while Arabs generally spend more time with family and accessing religious content and less time with entertainment-related activities.