Media and Leisure in Qatar 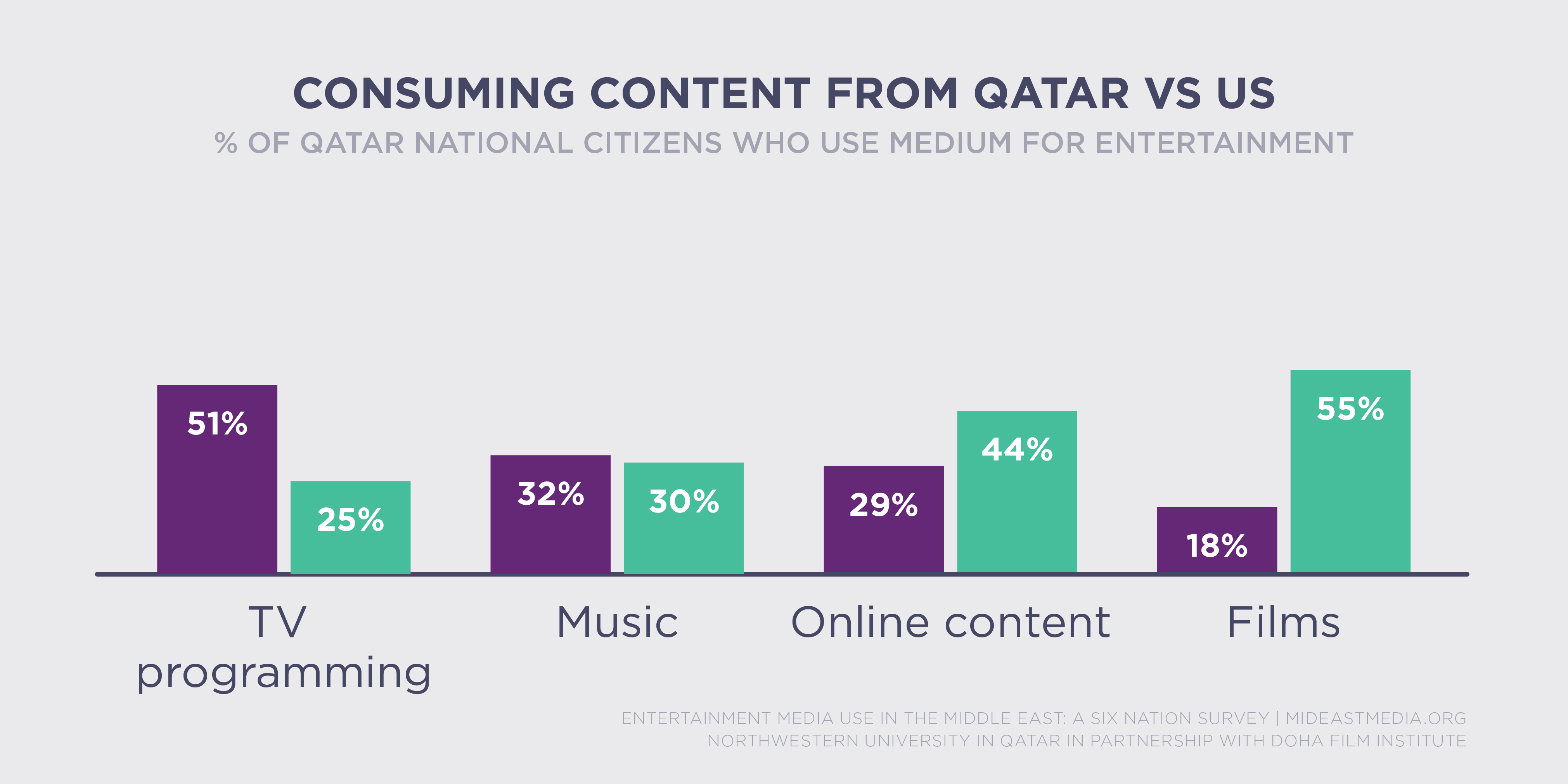 Most people living in Qatar enjoy television, films, passing time online and going shopping for fun and leisure, much like others throughout the MENA region. However, those in Qatar have some unique entertainment media habits. Qatar residents are much more voracious readers of print media for entertainment purposes, including newspapers, books and magazines than all others from the region.  . Eight in ten Qatar residents read newspapers and half do so daily (81% and 53%). Comparatively, two-thirds in the region read newspapers, and only a quarter do so daily (65% and 26%). Qatar residents are also more likely than others to participate in sports and exercise (83% vs. 65%), and three in ten claim to exercise every day (31%). Overall, those in Qatar are less likely to listen to music (71% vs. 84% total sample) or to play video games (33% vs. 43%) than others in the MENA region. Qatar residents enjoy films as much as those in the other MENA countries, but prefer different formats for watching them. Most people across the region watch films on television, but Qatar residents are more likely than residents from the other countries (except UAE) to go to the cinema (52% Qatar vs. 45% total sample; 82% UAE), while Qataris are less likely to watch films on the internet (66% vs. 75%) or on disc (43% vs. 53%).

Expatriates in Qatar exercise and play sports more than nationals – nearly nine in ten expats of all nationalities say they play sports and exercise, compared with three-fourths of Qataris (73% Qatari nationals, 87% Arab expats, 85% Asian expats, 89% Westerners). Expatriates are also more likely than nationals to report reading books and magazines for entertainment; newspaper readership is more consistent across nationalities, but highest among Asian expats (88%).

Arabs in Qatar are different from many other Arabs in the region with regard to the languages in which they consume media. While almost all Arabs in Qatar consume media in Arabic – films, television, music, video games, videos and print – many also do so in English. Of note, seven in ten Qataris watch English language films, and four in ten watch TV or listen to music in English and one-quarter read printed materials in English. Notably, Qatari gamers (and other Arabs in the country) are more likely to play video games in English than Arabic (84% English, 34% Arabic); nationals in other countries are more likely to play in Arabic. Asian and Western expats in Qatar consume entertainment content almost exclusively in English. Asian expats also commonly consume entertainment content in Hindi.

While most people in this survey watch entertainment produced in their own country, Qatar is an outlier in this respect. Only three in ten Qatar residents watch Qatar-produced television, and even fewer watch online content or listen to music from Qatar (18% and 14%, respectively). A meager 9% watch Qatar-produced films. Even Qatari nationals do not frequently consume Qatar entertainment – 51% watch television, 32% listen to music, 29% watch online content, and 18% watch films produced in Qatar. Whether this low consumption of Qatar content is due to a lack of material or a lack of preference was a question not asked in this study.

Qataris are more likely to consume content from the United States than from Qatar. Qataris do enjoy content from the MENA region, if not from Qatar in general. A large majority of Qataris watch films, television and online content, and listen to music from the MENA region, primarily from Mashreq -Levant countries (Egypt, Lebanon, Jordan, Syria, Iraq, etc.) and Arab Peninsula/Al Khaleej countries (KSA, Kuwait, UAE, Qatar, Bahrain, Oman, and Yemen).