Going to the Cinema 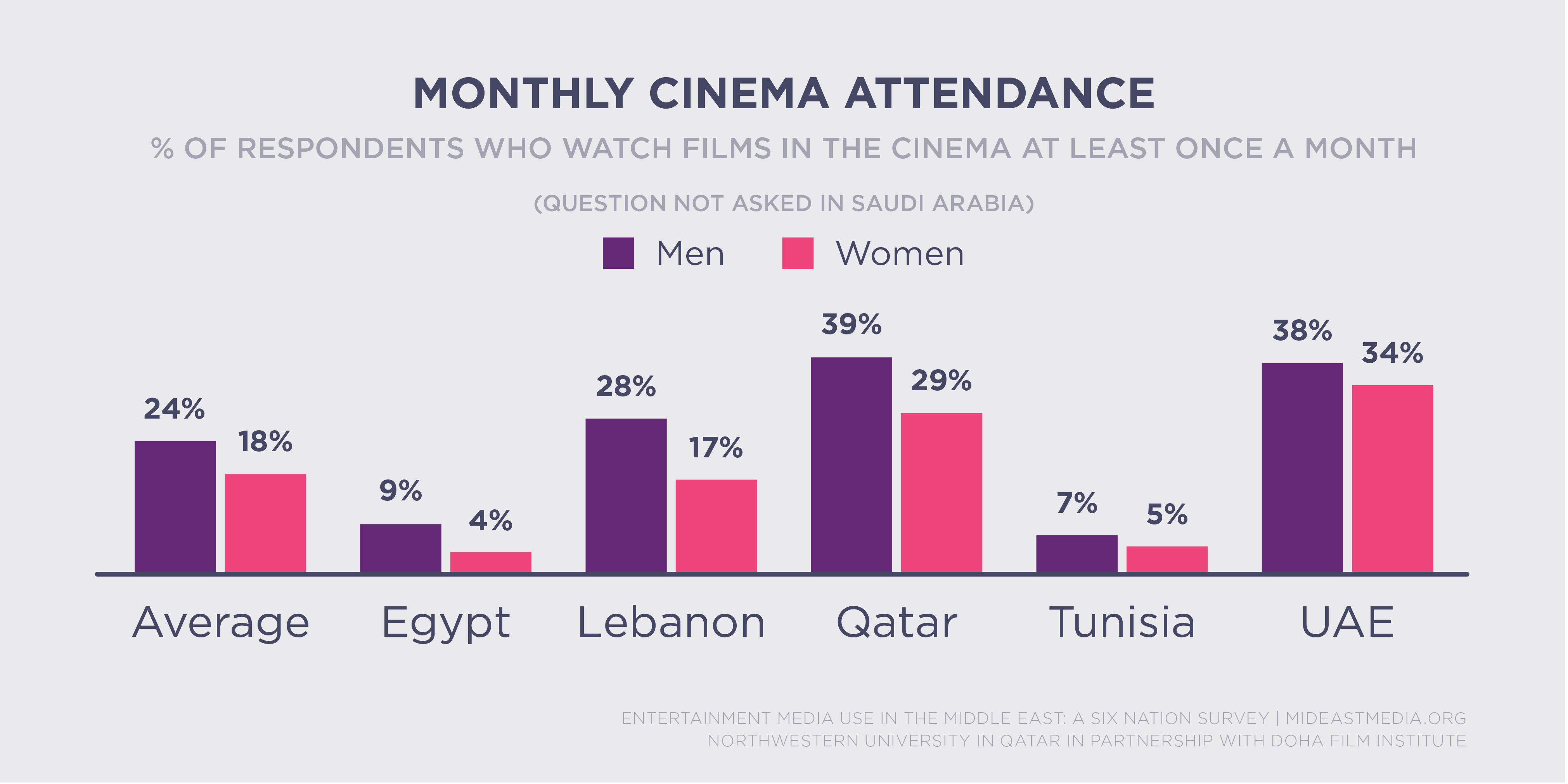 Saudi Arabia, which does not have cinemas, is not included in statistics about watching films in the cinema.

In the countries covered in this study, film viewing is much more likely to take place on a “home screen” than in a cinema.

Fewer than half of the people in the countries covered in this study go to the cinema at all (45%). Cinema-going is especially rare in Tunisia, where only 15% ever attend. Going to a cinema is also uncommon in Egypt, where less than one-third say they ever watch films in a cinema (28%). About half go to the cinema in Qatar and Lebanon (52% and 46%, respectively). The UAE is the only country covered where going to the cinema is quite common; a large majority attends the cinema in the UAE (82%). There are no cinemas in Saudi Arabia.

In the MENA region overall, the cinema is more popular among men than women – nearly half of men go to the cinema compared with four in ten women (49% vs. 40%) – but this gender difference varies by country. Men are much more likely than women to attend the cinema in Qatar, Egypt and Lebanon, whereas cinema attendance is equally high in the UAE and equally low in Tunisia across genders.

Cinema attendance generally is more popular among young people, particularly those under 35, even in those countries where the practice is otherwise rare. Overall, only one-quarter of those aged 45 and above ever watch films in a cinema, while more than half of those under 35 do so (25% vs. 55%). While attendance at the cinema varies by country, the pattern of viewership by age is similar across the countries covered in this study, with younger individuals more likely to attend the cinema than their older counterparts. Younger individuals also are more likely to watch films on the internet and on disc, suggesting a greater interest in film overall.

Attendance at cinemas is strongly correlated with income. Those in the highest income bracket are more than twice as likely to go to the cinema as those with less disposable income (58% highest quartile vs. 27% lowest quartile). Cinema-going also differs greatly by education level. Generally, the higher an individual’s education, the more likely they are to go to the cinema. Only one in ten of those with primary education or less ever goes to the cinema, compared with two-thirds of those who have attended university (9% vs. 65%, respectively).

Only a quarter of people in the region see cinema attendance as an important factor in their entertainment (26%). As with frequency of attendance, the perceived importance of watching films in the cinema as a means of entertainment varies by age, income, education and nationality. Younger people who watch films in the cinema are more likely to see this activity as important, as are those with higher educational achievement. Nationals in the five countries with cinemas and Arab expats are far less likely to think of cinema-going as an important source of entertainment than are Asian and Western residents in the MENA region.

Saudi Arabia, which does not have cinemas, is not included in statistics about watching films in the cinema.