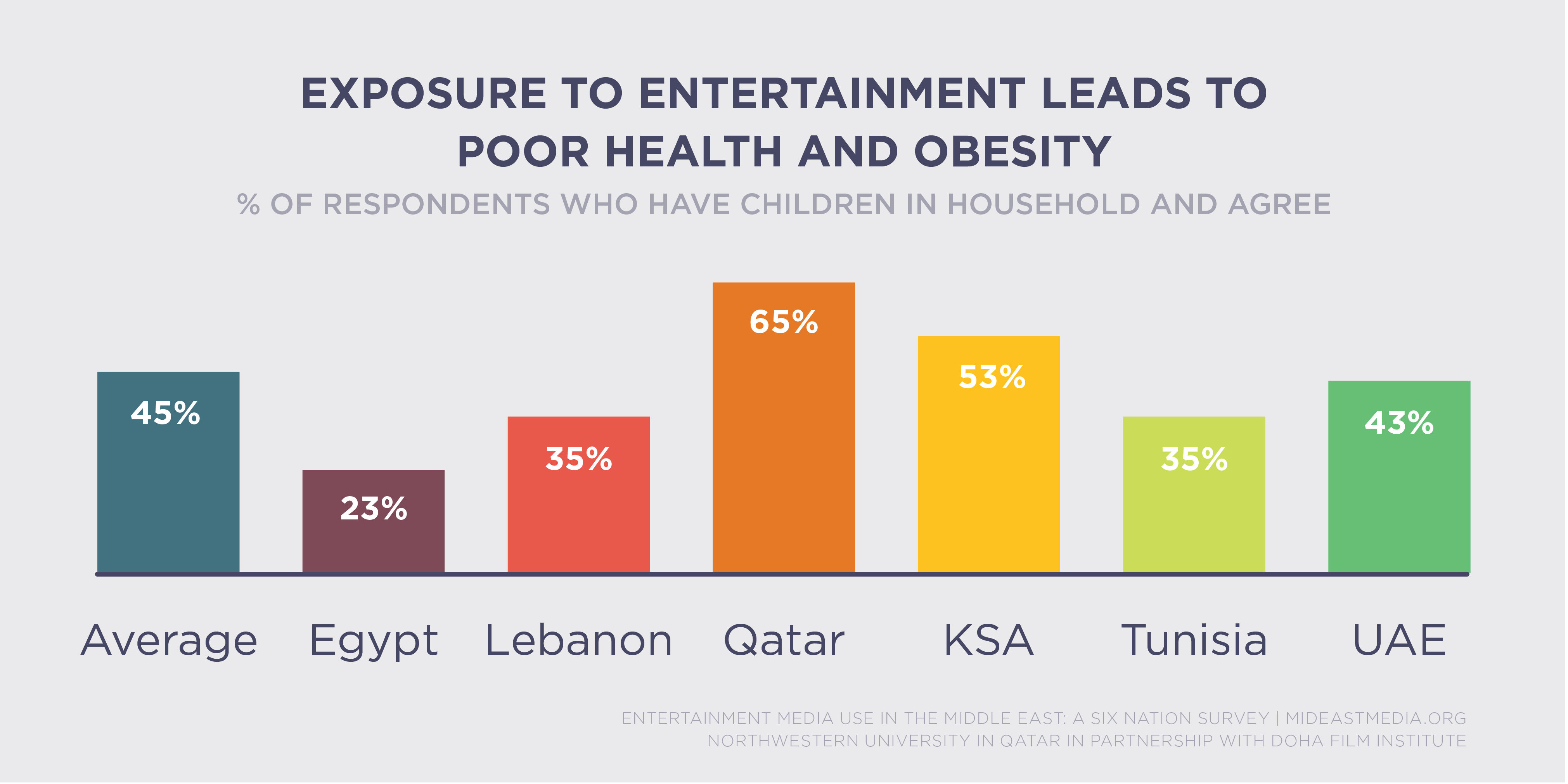 The position that entertainment media help with hand-eye coordination and development of fine motor skills among children is stronger in Gulf states (64%), where the use of mobile tablets and video games is more likely than the other countries in the study.  This is most strongly felt in Saudi Arabia and Qatar (70% and 65%, respectively).

Western expatriates are much more likely than are Arab nationals to believe entertainment media can have a beneficial effect on children’s hand-eye coordination and fine motor skills (75% vs. 54%, respectively). In Qatar, though, both nationals and expats share a similarly positive viewpoint on the matter.

The perceived link between entertainment media and poor health is not as strong, but still a potential cause for concern. Nearly half of respondents with children in the household feel exposure to entertainment media can contribute to poor health and obesity (45%), while a third disagree (31%).   The belief that entertainment media contribute to weight gain among children is particularly acute in Qatar, where two-thirds of respondents with children in the household see a connection (65%); a majority also expresses concern in Saudi Arabia (53%).  Concern about the impact on health is consistent across ethnicities in these countries. Egyptians are much less likely to be concerned about a link between media and poor health among children (23%).

The belief in a link between children’s entertainment media and poor health and obesity increases with age.  Four in ten of those under 25 who live in a household with a child under 18 feel children’s entertainment leads to poor health and obesity; this is compared with over half of those 45 or older.  A belief in this link also differs according to education; those with university degrees, for instance, are much more likely than those with only primary education to accept a linkage (51% vs. 32%).

Nearly half of people in the MENA region in a household with children agree that exposure to entertainment media creates lack of focus or attention deficit in children (42%); only 28% disagree. As with other health-related factors considered in the study, there are considerable differences of opinion between countries, with Egyptians being the most skeptical by far (only 15% agree). Only in Qatar does a majority express concern about a connection between entertainment media and children’s lack of focus and attention (63%). Qataris and other Arabs in the country are more concerned about the impact of entertainment media on attention than non-Arab expats living in Qatar, although the majority of all groups assume a linkage.